Home of the Asylums Edge guild in Black Desert.

11:25
CDT
Asylums Edge is currently recruiting all classes.
None

State of the Guild - Weekly Update 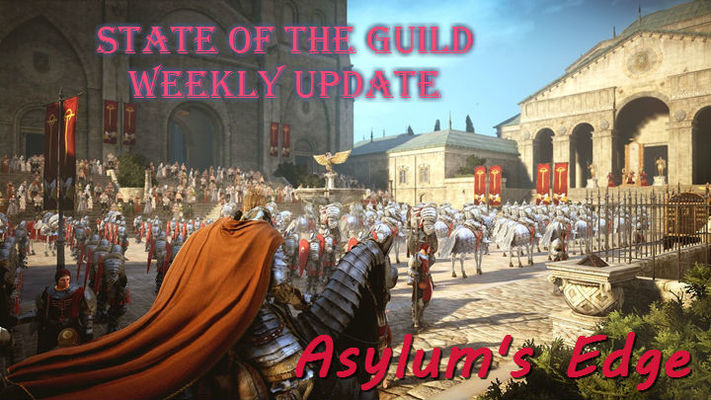 I wanted to make it a point to post on here once a week about where we are going as a guild and any upcoming events that may be important to everyone. I strongly believe that communication and organization are going to be important moving forward to our overall success in the game.
Now that we are a few weeks into the game we have lots of leveling activity and recruitment is almost finished. We are getting close to the cap on membership! Thankfully now that we have opened up all available member slots we can now use our guild points towards skills to benefit every member. We are happy to see the progress made by everyone leveling up and working towards better gear.

I also wanted to thank everyone for being an awesome group of people to play the game with. After running guilds for years it’s nice to have a group of people who work together and help build up the guild funds. This is by far one of the most respectable groups of people I’ve had the opportunity to play with. Thank you all for making the game that much better!

With node wars and guild housing coming in the future it will be critical we know how to work together and put in effort to becoming a top guild on the server.

We’ve had some wars declared on us from other guilds this past week that give our higher levels an opportunity to engage in fights with different classes. We have held off of declaring any ourselves until we have a few more people leveled up. Since it costs money to declare we definitely want to make sure that we don’t drain the guild funds until more people have an opportunity to assist. For now, don’t be afraid to attack other guilds who have declared on us! You learn a lot about your character and PvP from engaging in fights. Soon we’ll start making our own declarations against other guilds. Asylum we’re coming for you!

Another option that we have is to practice fighting in an arena setting with other guild members. This is a great tool that we all need to make some time for. I know there are several people who are more than willing to practice with guild mates so don’t be afraid to ask. As we start scheduling activities and events for the guild this is something we will schedule time for.

We do have a Mumble server that everyone is welcome to use. There are several channels that can be used for a private party. If you need the login information any of the officers can provide it to you. We’ll also post the information in the forums for access. If there is another voice server that people feel would be better to use please let me know. Once we get into organized activities it will be important to have everyone on Mumble so we can communicate more efficiently. Pain and I are often on Mumble so you can hop on to say hi at any time!

Over the next week or so I will be updating the website to add a lot more information and forum posts. I will be posting a contest for guild members of all levels that I think people would get a kick out of. I also am going to be posting some information about contribution to the guild, contracts, and potential raises. I encourage everyone to use the forums to post questions/helpful information/off-topic posts as well.

One last thing this week to let you all know. Pain and I will be moving starting Wednesday so our time may be limited. Unfortunately we will have to power down in order to move the computers to their new home. We may be on but afk more than usual until we are finished with the move. Crem is also making a trip to help us so there will be a stretch of time on Friday where we are unavailable. Thankfully it’s not a major move so we should be back in the game by the end of the weekend.

Thanks again for being a part of Asylums Edge! See you in game 
~Sayah
0 Likes
Share

Help pay for the website together with Group Pay!